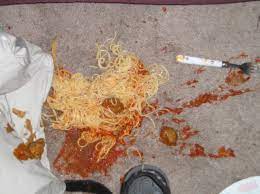 I remember working really hard one day, approximately nine years ago, to create multiple pots of spaghetti sauce. I wanted to make enough to freeze some.

We ate dinner, and then it was time to put everything away. I filled a Tupperware bowl that would be a decent size for freezing part of the sauce. It was a brand new bowl, and I was having a hard time closing the lid. But I wasn’t going to let it get the best of me, no way. I slid my hand over the lid and then pressed my entire weight against it to close it, but the bowl refused to cooperate and flew away. With a vengeance, it shot out from under me, spilling spaghetti sauce all over the place.

I had already cleaned the refrigerator door by the time I remembered to take a picture. A corridor with a set of steps going to the front entrance can be seen behind me. Sauce ran down the stairwell, along the banister, and all the way to the front door. I couldn’t stop laughing. It took us a long time to clean up. My one-year-old had no idea what was going on and wailed the entire time. Max stated that it was not amusing at all. He said he’d laugh about it in a year or two, but nine years later, he still shakes his head and thinks it was awful!

I took my baby to the doctor a few days later. When I handed the nurse the shot record, she made a strange expression as she received the card. I looked down and saw spaghetti sauce smeared on it. We were still cleaning up sauce spots when we moved out of the house. I’m not sure I’ve ever made such a large pot of sauce before!